We are told that Gilles de Rais confessed "voluntarily and without coercion", but this was merely an Inquisition formula; the same is said of his servants, and it is quite clear that their testimony was extracted forcibly. Most biographers state that Gilles' confession was produced merely by the threat of torture, and often there is an implication that he was a coward. It seems unlikely that he was allowed to escape physical interrogation, however, since at that period torture was used routinely, often merely to confirm a confession that had already been made.

On October 20th, after Gilles had made a rudimentary confession in court, in which the only crime he admitted to was alchemy, the prosecutor announced that he had established the case for the prosecution with this confession and the production of witnesses and their evidence. However, “in order that the truth might be further scrutinised and elucidated”, he asked the judges to have Gilles tortured. Malestroit and Blouyn then consulted with experts and concluded that Gilles should be put to the Question.

The court assembled at terce the next day and the previous day's events were recapped. Although the next day was already fixed for Gilles to present his argument, the judges decided to proceed with the torture immediately. The accused was then brought in and “humbly begged” for the torture to be deferred until the next day, reasonably pointing out that this was the day they had set aside for the purpose. He promised to deliberate on the transgressions he stood accused of, in the hope that he could satisfy them and so make torture unnecessary. He asked that the Bishop of St-Brieuc and Pierre de l'Hôpital – representing respectively the ecclesiastical and secular courts – should hear what he had to say. He made two stipulations: that this must be done somewhere away from the torture chamber, and that he would not talk to Malestroit and Blouyn, only to their representative. The judges readily assented, but would only delay the torture until 2pm of that same day. They conceded that if Gilles were to confess to all or even some of the charges, perhaps they might postpone the torture until the next day “because of their great affection for him”.  Note that at no point did they promise that he would not be tortured at all.

It is noticeable that apart from two passages of direct speech, there is very little in this so-called “out-of-court confession” that could not have been extracted from the articles of accusation, the statements of complainants, or various other points during the course of the trial; all of which were based on  Malestroit's secret letter of the 30th July. The only new information is the dating of the crimes, and even there Gilles refers only to sodomy and differs from the articles by six years. The rest is a mere formula, which Gilles was required to assent to in order to avert the threat of torture.

Gilles' public confession took place the next day, October 22nd, not in the morning, but in the evening; only one other sitting took place at vespers rather than terce, on October 17th, after the interrogation of Gilles' friends. It is almost certain that he was tortured in the interim. His judges had only promised that the torture would be deferred if he confessed, not waived. The most likely method would have been the water torture, an early form of waterboarding in which water was forced into the victim's body through a funnel in the mouth.

Gilles' rank did not spare him from being put to the Question. The confirmation comes in an unexpected form in Charles VII's letters patent of January 1443.  These documents are often dismissed as insincere, but the King expressed himself with great forcefulness for a man making a cynical political gesture. The key word in his letters is attentats, outrages, meaning that Gilles was subjected to severe ill treatment while in prison. This is the strongest possible implication that he was tortured. 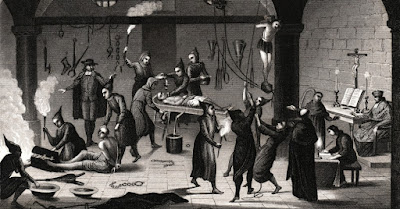