Another typically improbable and unsupported anecdote from the witness statements.

In 1438 the son of Jean Bernard, aged 12, went to ask for alms at Machecoul - as Bataille helpfully points out, this is a distance of about 55 kilometres from his home in Port-Launay, Nantes, and he would have had to cross the river. He was not alone: his friend went with him, but they were clearly separated, and the Bernard boy did not turn up at their rendezvous.

Already the distance involved makes the story rather unlikely. Would a boy of twelve - we are not told how old the friend was - really have made such a lengthy journey? It is true that Gilles' almsgiving was legendary - but we are also told that there was a "public rumour" that he was abducting and killing children. No later than 1433 it was being averred that Machecoul was a place where "they eat little children", according to serial witness André Barbe.

We are not told whether the boys actually went to the castle when they arrived in Machecoul. Young Master Bernard went off in search of lodgings and for some reason his friend, the son of Jean Meugner, did not go with him. This seems odd in itself; why would they not stay together, especially as Machecoul was rumoured to be a dangerous place for children?

If he had appeared in court, the friend who survived the trip might have shed some light on exactly what did happen. But he did not. The disappearance of Jean Bernard's son was attested to by his neighbours: Jean Fouriage, his wife Jeanne and a couple of others, who had "heard the son of Jean Meugner" give his account of what happened; in other words, it was yet another example of what Prouteau dismissively calls ouï-dire, hearsay.

The boy's father was dead but his mother, very much alive, was heard complaining bitterly. In spite of her grief, she did not give evidence at Gilles's trial; she was too busy with the grape harvest.

So the two people who knew most about this case were not present in court and the boy's loss was attested to by neighbours of his dead father who produced hearsay evidence and, for good measure, added a gratuitous anecdote about seeing an old woman with a child pass through Port-Launay on her way to Machecoul and later return without the child. Without hearing from the son of Jean Meunier we have no idea whether the boys really reached Machecoul safely, how and why they came to split up, and whether they went to the castle and received alms or not.

It is a pointless and fragmentary anecdote with no real link to Gilles and no evidence other than hearsay from people with only a tenuous connection to the persons involved. 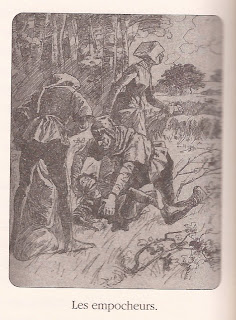 The testimony of outside witnesses at the trial of Gilles de Rais is supposed to constitute a cast-iron case against him. In fact, the evidence is feeble in the extreme; fragmentary, contradictory, largely hearsay and containing many improbable stories like the following:

The sixteenth recorded abduction/murder, in April 1439, was that of the son of Micheau and Guillemette Bouer. No name or age is given for him. The boy left his home near Machecoul to go to the castle and ask for alms; he never returned.

At the trial, his mother told a curious anecdote of how the next day, presumably long before she realised that her son was missing, a large stranger in black approached her as she was minding the animals in the fields and asked where her children were and why they were not doing the task. She replied that they (suddenly her son had a sibling or siblings with him) had gone begging at Machecoul.

The necessary implication is that somebody at the castle took the trouble to find out the name and home of the young presumed victim and deliberately travelled some distance to seek out his mother and ask a suspicious question.

Why? It simply makes no sense at all.

Particularly as Gilles was living at Tiffauges at the time, not Machecoul. 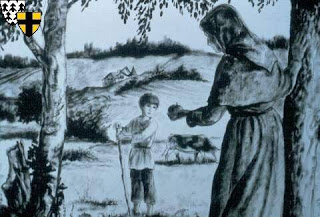 Illustration taken from the site of the Musée Pays de Retz, which relates Gilles life - the non-revisionist version - in French
Posted by morbid morag at 16:26 No comments:

Perrine Martin, La Meffraye, is a strange and, it has to be admitted, convenient figure in the mythology surrounding Gilles de Rais. She seems incongruous; she and her lesser-known crony Tiphaine Branchu are the only women connected to his entourage, the only representatives of old age amid all that youth and beauty. They stalk the countryside like fairytale witches, striking fear into all hearts, to the point where Martin is given her menacing soubriquet of The Terror. She wears black and covers her face with a veil, yet children are curiously drawn to her.

In spite of her inexplicable powers of attraction, the children are not allowed simply to walk with her into the castle - they are accosted by the mysterious empocheurs, anonymous henchmen who overpower them and put them into sacks. This seems rather unnecessary when they are going along with her willingly and when we know that at least one porter is in on the secret - Gilles, presented with a young boy at the Hôtel de La Suze, instructs Martin to lead him to Machecoul and hand him over to the porter. It seems that the mythmakers wanted it both ways: a sinister old crone who lures children away like the Pied Piper, but also violent abduction by thugs who lurk in the bushes.

Martin's testimony has not come down to us, say gullible biographers; like so much else in the heavily-edited trial documents, it has been lost to history. She does not appear to have given evidence in court, but her prison confession is widely broadcast. In fact, her words are often the only link between Gilles and a missing child - one wonders how so many parents came to learn of her accusations. However it came about, it is strikingly convenient for the prosecution, especially as La Meffraye is supposed to have died in prison before being brought to trial.

More strangely yet, although she must have cut an odd and conspicuous figure, the doughty married couple Jean Estaisse and his wife Michele swear that they have never heard of her; nor, indeed, of any rumours about Gilles de Rais until he was arrested.

So who was La Meffraye? Was she, as she is presented, a procuress for Gilles? Was she some witch or local lunatic who could serve as a scapegoat for local child abductions and be used to inculpate him? Did she die under torture? Was she killed? Did she collude with the authorities and earn her release? Or did this shadowy creature exist at all? May she not merely be a figment of the collective imagination, perhaps used to frighten children into obedience, and gratefully latched onto by Jean de Malestroit?

As so often, we are left with more questions than answers and an uneasy feeling that there is something not quite right here. 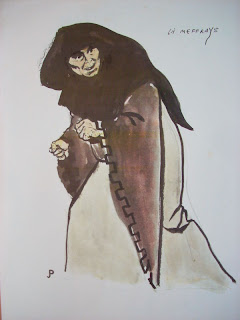 Illustration by Jean Pleyers
taken from this blog.

Posted by morbid morag at 00:49 No comments: