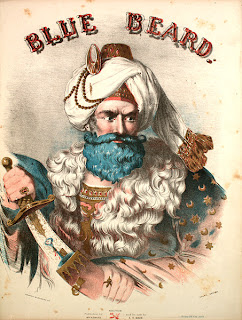 That Gilles de Rais is now completely entangled with the Bluebeard myth is almost entirely the fault of the Abbé Bossard, who deliberately set out to conflate the two. His contention, based on nothing but pure conjecture, is that Gilles was linked with Bluebeard from the 15th century onwards and that Perrault's version of the story was partly inspired by him. Thus, Gilles de Rais is the real-life Bluebeard suggested by so many books.

Bossard cites three pieces of evidence in favour of his theory, a Breton complainte, a legend and a long poem. Conveniently, if improbably, two of them mention Gilles de Rais by name. The Lament of the Young Women of Pléeur, in which an old man interrogates a group of girls on the reason for their misery, is oft-quoted -

Old Man: (In terror) Bluebeard lives here! Ah! Fly quickly, my children. The ravening wolf is not more terrible than the wild Baron; the bear is more gentle than the accursed Baron de Rais.

Young Girls: We are not able to fly: we are bound to the Barony of Rais, and we belong, body and soul, to my Lord Bluebeard.

Old Man: I will deliver you, for I am Jean de Malestroit, Bishop of Nantes, and I have sworn to defend my flock.

Young Girls: Gilles de Laval does not believe in God!

Old Man: He shall come to a bad end! I swear it by the living God!


Bossard claims that he found this lament in the works of a writer named d'Amézueil, without specifying in which book it appears. The splendid E A Vizetelly remarks that he was unable to find this particular piece anywhere in d'Amézueil's published writings, that bears and serfs would be unlikely to make an appearance in a complainte of that period, and that this is probably a "modern confection".

The second allegedly old tradition is a story where Bluebeard, also known as Gilles de Laval, attempts to marry a young woman by force and is thus tricked into pledging himself body and soul to the Devil, who turns his red beard blue as a token of their pact. (One should remark here that Bossard accepts the Bibliophile Jacob's dubious and lurid account of Gilles' trial, including the physical descriptions of the accused with his blue-black beard.) Bossard makes no attempt to source this story to any particular folklorist or historian.

Bossard then cites a long poem in which a nameless poet reflects on his blighted childhood, spent in the haunted shadow of Bluebeard's castle, which, as this is supposedly a local poet, is clearly Machecoul or Tiffauges or Champtocé. The poem is anonymous, undated, unsourced and has been rightly ignored by later commentators. It cannot have been written much earlier than the eighteenth century, since by Bossard's own admission the name of Bluebeard was never mentioned by a French writer before Perrault and the refrain - "Anne, ma soeur, ne vois-tu rien venir?" - refers to a character, a situation and a dialogue invented by him in his influential conte .

It is interesting that Bossard is so lax about supplying a provenance for these "old, traditional" tales and rhymes, as throughout his long biography he has hitherto been scrupulous about footnoting the exact page of every work quoted. Even when he mentions oral tradition he insists that it comes from "old people" and once from a particular old lady who showed him round the ruins of Tiffauges. That what appears to be his strongest evidence is unsourced is suspicious in the extreme.

There is no doubt that there is a modern tendency to regard Gilles de Rais as the real-life prototype of Bluebeard; I have some 1973 postcards from Champtocé and Machecoul and they all refer to "la château de Barbe-Bleue". What is in dispute is whether the tradition goes back beyond the French Revolution - and, indeed, whether it might not have been influenced by Bossard's own writing.


All the indications are that when Gilles de Rais died, his death was greeted with tears and mourning. One contemporary claimed that the noble ladies who prepared his body for burial took some of his bones as quasi relics.We have seen that his expiatory monument was a place of pilgrimage and there is some indication that his tomb was similarly venerated. Up until the French Revolution, when his tomb was destroyed along with the church in which he lay, he seems to have been regarded as a Breton saint. It seems highly unlikely that a Bluebeard myth could exist alongside this memory of a paragon of Christian repentance; it could only have begun after 1789, when the tomb and the monument had gone and the pilgrimages and prayers came to a forced halt. Such a tradition could not have influenced Perrault, who died in 1703 and whose highly popular version of the story was published in 1697.

Gilles de Rais was not Bluebeard. And Bossard's determination to twist the evidence to make it confirm his own prejudices is indicative of his approach throughout his notionally authoritative biography.


[In this old newspaper report, firmly based on Bossard's account but written in English, you can read The Lament of the Young Women of Pléeur, the legend in which Bluebeard marries the Devil, and much other Bluebeard-related lore. Click here for Perrault's tale, English language version. The full text of Bossard's biography is available here, French only.]