The Beast of Extermination: a numbers game 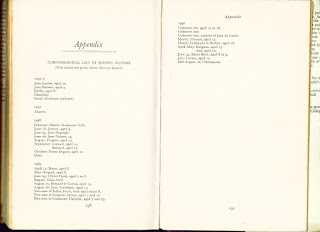 This is the list of "known victims" published in Gilles de Rais The Authentic Bluebeard by Jean Benedetti. There are fewer than forty. Of those, a full name is given for only a dozen. The rest have only a family name and sometimes an age. Three are simply "unknown boy" - there are no girls listed.  Apparently there were no known victims in 1434 to 1436 (and only one in 1437). We know that from the autumn of 1434 Gilles was travelling for a year, but according to the trial record this did not curb his insensate lust; he killed in hostelries, in private houses, in a field once, even under the roof of Jean V. Which in itself seems strange: did nobody hear or see anything amiss?
This is the Beast of Extermination, so-called by Michelet, who decimated the countryside, abducting and killing probably more children than were living there at that time. We have already looked at charge XV of the indictment - that "for the past fourteen years, every year, every month, every day, every night and every hour... [Gilles] took, killed, cut the throats of many children, boys and girls..." and pointed out that this means 1426 and not 1432. Jean de Malestroit had scoured the region searching for proof that Gilles de Rais was some kind of child-devouring ogre. Days had been taken up with witnesses giving evidence, much of it what Prouteau calls ouï-dire, hearsay. And the end result of all that labour, of that "public rumour" - thirty-seven boys missing, of which three are anonymous, in fourteen years. No more than you would expect, probably, in a country still at war and roamed by marauding gangs of armed brigands as well as dangerous wild animals.
Benedetti is the only biographer who lists the known victims, and one can see why. The numbers themselves are pathetic, before one even examines the quality of the evidence. No, if we are to keep our Beast of Extermination, far better to quote long, confusing chunks of the trial, with some witnesses brought in solely to back up the evidence of others and all that hearsay and rumour. It sounds so much more impressive than a bald list of thirty-odd names and half-names standing in for the hundred and forty, two hundred, even eight hundred that legend insists on and logic demands.
Posted by morbid morag at 16:23