One of the few things we know for certain about Gilles de Rais is that he spent the winter of 1430 at Louviers, less than sixteen miles from Rouen, where Jehanne was imprisoned. We know he was there because of a document which states that he owes to "Rolland Mauvoisin, his squire, captain of Le Prinçay, the sum of eighty gold crowns for the purchase of a black horse, saddled and bridled, which he promised to give to his very dear and well-beloved squire, Michel Machefert, captain of the men-of-arms and bowmen of his company, directly they arrived at Louviers, to induce him to come with him on that journey." (Quoted from E A Vizetelly)

Most biographers suppress this detail. Where they mention it, they gloss over it - Benedetti, for instance, quotes this document but omits the last part, so that it ends "...and bowmen of his company at Louviers" (my italics), thus making it appear as if Gilles went to Louviers specifically to buy a horse.

Now, Louviers is in Normandy, which at that time was controlled by the Anglo-Burgundians. It was occupied territory and was in a state of guerrilla warfare. Louviers itself had been taken by La Hire twelve months previously (it fell to the English again in October 1431.) Some of the towns to the south had been liberated by Jehanne's Loire campaign, but Louviers (and Rouen) were further north.

It is also between 330 and 391 kilometres (205-243 miles), depending on the route, from Champtocé, the closest of the castles Gilles habitually inhabited: further from Machecoul, Tiffauges and the Hotel de la Suze in Nantes. A car journey today would take three to four hours. In 1430, that would have meant at least a week on horseback, allowing for stops to rest the horses, for much of the time through hostile terrain.

It seems highly unlikely that Gilles would go to these lengths simply to buy a horse - which, in any case, he seems to have bought before he set off as a bribe to his squire for accompanying him on this perilous journey.

He had an army with him - necessarily so, travelling through Normandy - and was later joined by La Hire, also at the head of an army. It seems almost certain that there was a plan to rescue Jehanne, which failed for some reason.

But the anti-Gilles faction cannot bear the thought that he ever did a brave or noble deed or had a generous impulse. So when he keeps open house and gives his guests expensive gifts, or puts on a free show for the groundlings, or endows a hospice, he is prodigal rather than good-hearted. And when he rides through Anglo-Burgundian Normandy, with an army, to stay in tenuously-French Louviers across the river from Rouen - he is merely there on a whim to buy a horse. 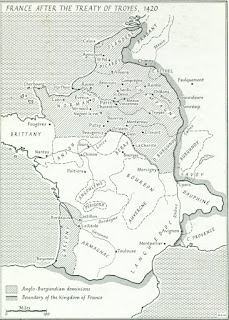 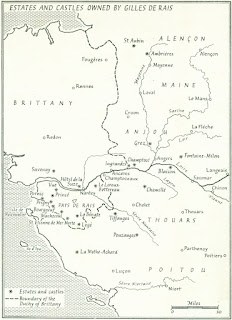 The first map shows the location of Rouen - Louviers, not marked, is on the other side of the river and slightly to the east - in relation to Brittany.  The second shows the location of Gilles' estates; most are clustered to the south of the Loire. (Both maps taken from Gilles de Rais The Authentic Bluebeard by Jean Benedetti.)

The modern map I consulted, showing the distance from Champtocé to Louviers, can be seen here.
Posted by morbid morag at 18:02