Gilles de Rais was not Bluebeard. There is no dispute about this whatsoever. The idea was first mooted by a few nineteenth century French and Breton writers, most notably the Abbé Bossard. There was never any traditional link between Gilles and Bluebeard before that time; in fact, he was seen as a kind of saint. Bossard was as ignorant of folklore as he was of history and had no idea that there were similar stories of an uxoricidal lover or spouse in other cultures. He knew of the legend of Comorre the Cursed, which was both similar to Perrault's conte and disturbingly local, but he dismissed it out of hand.

Yet people in the 21st century still assert that Gilles de Rais was Bluebeard, and it is difficult to see why. There is no similarity between a man who kills curious wives and one who allegedly murders children, except the basic subject matter of killing. Nor is it likely that his story would have been watered down so that he “only” killed wives. Fairy tales were originally intended for adults and there was no taboo on gruesome subject matter: the Pied Piper abducted children to an unknown fate, the Erl-King's daughter (or the Erl-King himself in Goethe's ballad) snatched them, a wicked witch fattened young Hansel for her table, and the ogre who meant to kill Petit Poucet mistakenly cut the throats of his own daughters. 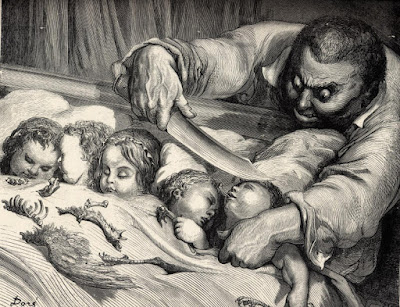 The following little-known story was garnered by the Grimms from the wilder shores of the oral tradition. It is short, sharp and definitely unsuitable for children. It negates the silly idea that folklore could not have handled the story of Gilles de Rais without bowdlerising it.

How Some Children Played At Butcher

There once was a father who slaughtered a pig, and his children saw that. In the afternoon, when they began playing, one child said to the other, "You be the little pig, and I'll be the butcher." He then took a shiny knife and slit his little brother's throat.

Their mother was upstairs in a room bathing another child, and when she heard the cries of her son, she immediately ran downstairs. Upon seeing what had happened, she took the knife out of her son's throat and was so enraged that she stabbed the heart of the other boy, who had been playing the butcher. Then she quickly ran back to the room to tend to her child in the bathtub, but while she was gone, he had drowned in the tub. Now the woman became so frightened and desperate that she did not allow the neighbours to comfort her and finally hanged herself. When her husband came back from the fields and saw everything, he became so despondent that he died soon after. 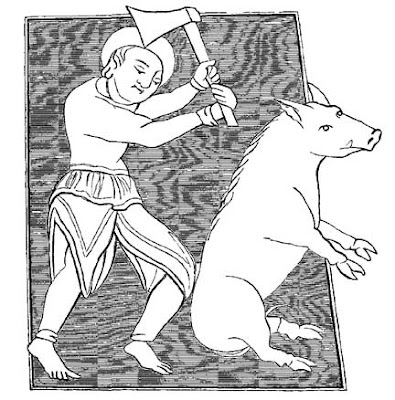 Illustration taken from this blog, where there is also an alternative version of the story.