A little light relief, on the basis that I like my revenge served icy cold. This happened a year ago and I held back from posting it at the time. Now I shall just add ice cubes, anonymise the guilty party (while making sure he can find this when he self-googles, and believe me he is big on self-googling) and post. I'm doing this not entirely out of malice -  he makes several bogus points that can be answered in a more appropriate forum. And it will be an object lesson in what happens to trolls who are stupid enough to abuse strangers in public.

On the whole, I have been very lucky on the internet, given that I'm loudly proclaiming a minority view which a few people find outrageous. Most people are polite and engage in reasoned debate. All that was to change when I saw the above Facebook post. Really? My blog is the third most stupid thing on the internet this year? Somebody's not really trying.

Now, I have a rule about commenting on Facebook posts. If it's on a Page, then it's fair game and I can try and start a discussion. If it's on an individual's wall as a public post, I sit on my hands, because it seems rude to barge in, however ill-advised I may think that public posting on controversial themes is. This was different, though. This was somebody insulting me in public and I couldn't let that go. After some thought, I decided on a lighthearted approach -

All quite civilized so far. I really didn't expect a reply; I was just advising him that I'd seen his post. He did reply, however, and from then on it all went downhill fast. He posted a long screed asserting his belief that Gilles was guilty, showing no specialist knowledge or any sign that he had read deeply into the subject or was even especially interested. I replied at half the length, essentially reiterating the arguments I have made repeatedly, on this blog and elsewhere. At this point nobody insulted anybody: we simply disputed the facts.

And then this happened - 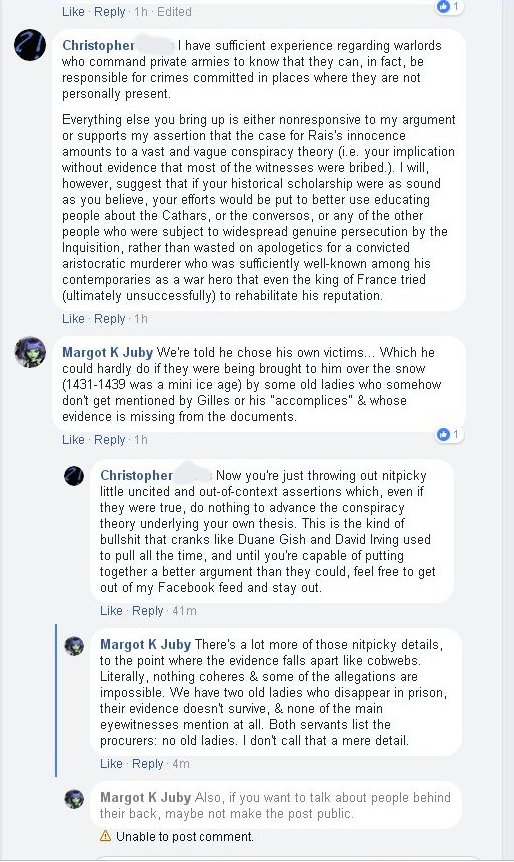 He blocked me! Apparently he couldn't argue with all those "nitpicky little uncited and out-of-context assertions" which build up to make a strong case for Gilles de Rais' innocence. I have never been asked to give citations on a Facebook discussion (and wasn't here) and, in any case, I was only quoting evidence from the trial. Which he's surely read, right? (The ice age? It's in the book, with full citation). I have no idea what he meant by "out-of-context"; he gave his argument, I replied to the point he made in that first sentence.

This should have been the end of the matter, but Mr X had failed to take into account the vagaries of Facebook and the dangers of public posting. Several of my friends had seen the exchange and decided to pile into the thread in my defence. And a lot of them took screen-grabs for me.

This is how he replied to one of them - 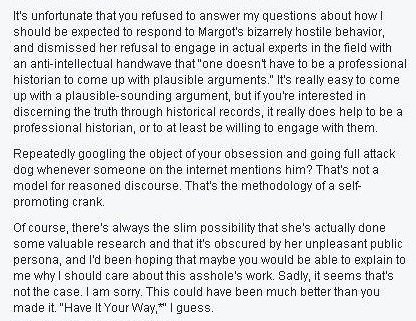 There are some perfectly crazed allegations in there. My "bizarrely hostile behavior", for one. "Going full attack dog" - not my style at all, as a simple Google search will establish. And hardly self-promoting, as I use a pseudonym much of the time - the same one I use for this blog, Morbid Morag. Research? Well, if he read the blog he'd know about that.

He just carried on getting weirder. Werewolves now! And sockpuppets - he couldn't believe that I might have friends who have been following my researches. 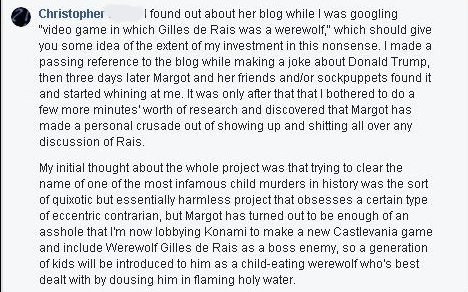 Note that - whole minutes of research on his part!

I think this may be my favourite insult (the innocent have been anonymised). 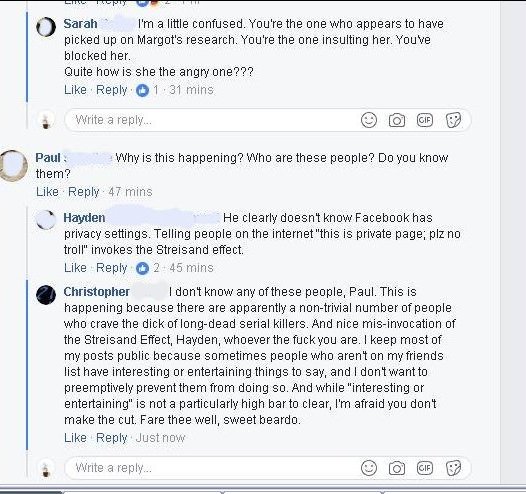 "A non-trivial number of people who crave the dick of long-dead serial killers". Clearly the laws of libel hold no fear for this brave keyboard warrior. 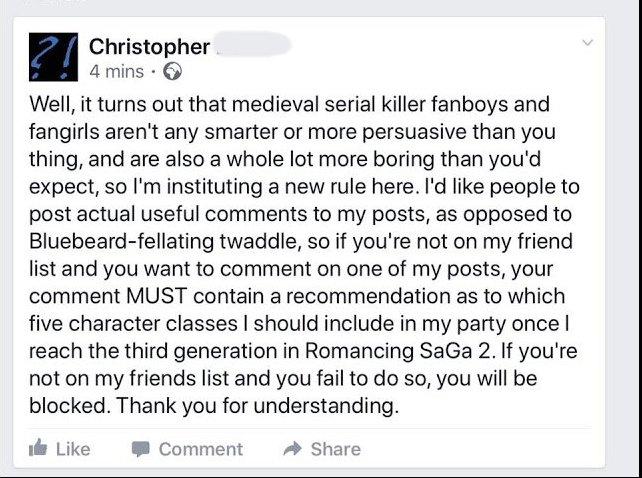 Bluebeard-fellating! (He hasn't read what I have to say about the Bluebeard myth, obviously). By this point he was already blocking everyone who supported me.


You may be feeling sorry for him by now. Why is this nasty lady persecuting what is clearly a precocious fifteen-year-old? Unfortunately, this foul-mouthed troll hunched over his laptop in his bedroom playing computer games and hurling libellous abuse at strangers on Facebook is actually a well-known lawyer in his late thirties.