This picture, a mash-up of several depictions of Gilles de Rais, was made for me as a Christmas card by a good friend and is shared with her permission. Enjoy!
Posted by morbid morag at 13:51 No comments:

I never meant to write a biography of Gilles de Rais. All I intended to do was bring the ideas of Reinach, Fleuret, Bayard and Prouteau to an English-speaking audience. I assumed there were plenty of decent biographies out there and all I would need to do was provide an outline of his life.


Then I read (in some cases re-read) those biographies, both English and French... Oh, dear. Even the best were inaccurate, the worst were compendiums of myth and fiction. This is what I said back in spring 2014: "There is no one book about Gilles de Rais, either in English or French, that gives all the known facts free of myth and with no agenda. All accept Bossard as an authority, and Bossard knowingly used the forged trial account by "The Bibliophile Jacob", Paul Lacroix, and invented a Bluebeard folklore that simply did not exist at that time. Also, there is no revisionist biography in English."

I touched upon the works of Prouteau and his predecessors and issued the first hint of what I was planning: "However, I do feel that they only scratch at the surface of the case for Gilles' innocence. If this blog is less regular than it might be, that is because there is a book to be written..."

Four years later (and eight years after I began my research) that book is finally complete. I have tried to be as inclusive as possible and to give a taste of various biographers and novelists. There is a detailed chronology, a couple of maps, an appendix that contains all the trial evidence, translations of Bossard's Bluebeard myths (including the lengthy anonymous poem that has never, to my knowledge, been rendered into English), my own version of the tale of Comorre the Cursed, various short essays and much, much more.

Some of the material first saw daylight in this blog. A lot more is new. If you want to know the identity of the spy in Gilles' household who took bribes from the Duke and was instrumental in spreading the "public rumour", for example, you must either read the book or research it for yourself. Also, it is fascinating how the life of Gilles de Rais takes on a completely new shape if it is not viewed through the filter of an unquestioning belief in his guilt.

The book tells the story of Gilles de Rais' life and death, but goes beyond that to give an account of his afterlife in fiction, culture and legend. If you want all the truth, plus an examination and debunking of the lies and myths, you need to read it. 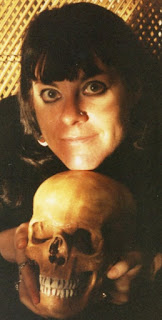 Portrait of the author
as a much younger woman

And now the book is written, what next?

There will be more developments.

Posted by morbid morag at 19:02 No comments: