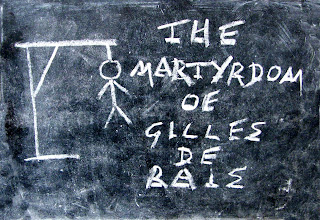 It is no secret that , although there have been several biographies in both French and English, Gilles de Rais has been ill served by his biographers. Most lean heavily on his first biographer, Abbé Bossard, who is unreliable, partisan, and props up his ludicrous Bluebeard theory by quoting liberally from a fictionalised account of the trial by Paul Lacroix, the Bibliophile Jacob. Consequently, myths such as the "illustrated Suetonius" that supposedly had such a corrupting influence, and the wholly fictitious veiling of the cross at a critical moment during the trial, are almost universally accepted as fact. Even Gilbert Prouteau mischievously copied Bossard's errors, notably by killing off Gilles' two fiancées, whereas at least one, and probably both, outlived him.

It seemed to me that an accurate biography would not only need to retell the life, but also track down those pernicious myths to their source and debunk them.

After several years of research and writing, I am preparing to publish my alternative biography in October 2017. The title is The Martyrdom of Gilles de Rais. Updates will be posted here, on Twitter, and on my Facebook page.
Posted by morbid morag at 16:39 2 comments: