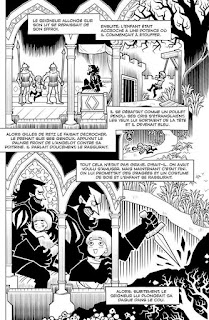 Page from a French bande dessinée, title unknown.
[Click on the picture to enlarge]

A few details of the so-called confessions, low key in the testimony, have stood out vividly to posterity and are always emphasised and elaborated on by biographers. These are invariably the most Grand Guignol elements. One of the most notorious of these details is the partial hanging of a child before the attack began in earnest. According to Henriet and Poitou's evidence, a child would sometimes be suspended from a hook, either by Gilles or one of his assistants, in order to silence any cries for help. Gilles would then take the boy down and reassure him that it was only a game, a reassurance that one can hardly imagine being effective on a terrified and half-strangled child. Writers have had a field day with this scenario, hypothesising that Gilles got a certain perverse thrill out of calming and caressing a child that he was about to kill. However, the valets are quite clear and prosaic: the hanging was done to silence the child. Of course, this was one way in which the prosecution sought to explain why no member of the household was alerted to the bizarre goings-on in the master's rooms: hanging would damage the vocal cords and make the slightest sound impossible. Gilles himself, in his various confessions, does not even go as far as his servants; he merely mentions hanging from a hook as one of several methods of killing. If the sadistic charade of hanging and rescuing had been a favourite pastime of his, one might reasonably expect him to mention it.

In fact, this is yet another example of the way in which writers have ignored contemporary documents and invented their own ogreish Gilles de Rais.

Note, please, that the cartoonist has placed the potence, or gallows, outside. Obviously nobody would have an instrument of torture in their bed chamber, the idea is ridiculous! In fact, it is the only part of the episode that is supported by the trial records: the children were supposedly hung from a hook in Gilles' room...
Posted by morbid morag at 18:50 No comments: