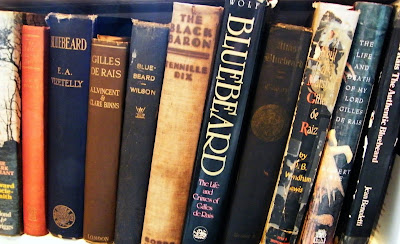 The first thing to stress is that the trial record is not a reliable nor, obviously, an impartial document. Little attempt has been made to conceal the fact that it was amended after the event; how long after is not known. It is not complete: we see Perrine Martin and Tiphaine Branchu brought into court and hear other witnesses refer to what they had to say, but we cannot read their own words. Their confessions, we are told, have not come down to us. It seems unlikely that this is accidental. We will see witnesses contradict each other and themselves, and allegations of impossible deeds. We will examine clear signs that the most damning evidence was extracted by torture, or at the very  least by the threat of torture. We will see Gilles de Rais harassed, antagonised, threatened and eventually broken.


What we will not see is the Bishop of Nantes rising up in outrage to veil the face of the crucifix when Gilles' testimony is at its most lurid; this was a flight of fancy by J-K Huysmans in his popular novel Là-Bas, elaborating on a less dramatic invention by none other than the Bibliophile Jacob. Nor, sadly, do we read “Pale grey starred with gold; and if he opened his doublet, a belt of scarlet with a dagger of grey steel hidden in a red sheath” or “Gilles appeared all in black, with a hood of velvet and a doublet of black damask trimmed with fur of the same colour”, as Valentine Penrose would have it. All these symbolic couture details are fictional and come from the fevered pen of Paul Lacroix, the Bibliophile. Nor will we see Gilles' beard with the bluish highlights, nor the lycanthropic grimaces of his handsome face: all this, likewise, was Lacroix's work. It is fair to say that nobody, probably not even Bossard, has so profoundly influenced Gilles' image. The trial record, in spite of the shocking nature of its content, is a dry and difficult read, which is why so few people have read it attentively. As a rule of thumb, whenever the accused is described, or the crowd's reaction is indicated, this is the hand of the Bibliophile. We are not told what Gilles wore or how he appeared; we do not even, surprisingly, have any explicit indication that the ecclesiastical trial was open to the public.

Translations of the documents are freely available in both English and French and there is no substitute for a careful study of them. The intention of this chapter is to explain clearly and chronologically what happened, to clarify any obscure points, and to examine in particular detail the passages that biographers tend to gloss over. Most commentators agree that it was a conspicuously fair trial for that period; although Reginald Hyatte, no revisionist, says “It is possible to interpret the legal action initiated against Gilles de Rais in both courts as the legitimate means by which the Duke of Brittany managed to acquire Gilles' possessions without arousing suspicion or causing a revolt among his other vassals.”  E A Vizetelly, the only English writer with a revisionist slant, remarks that “the proceedings of the court were scarcely lawful”. As we shall see, Gilles seems to have agreed with him, and for much the same reasons.

[Second brief taster of my new Gilles de Rais biography, which should be completed in 2017. The first snippet is here.]

Posted by morbid morag at 02:20 No comments: