In the early days of the internet, when it had a capital I and the Millennium Bug was a dark cloud on the horizon, it was sometimes called the Information Superhighway. The idea was that it would be a repository of all knowledge. That was not how it worked out. Disinformation spreads faster than facts and most people now know that, in the words of Abraham Lincoln, not everything you read on the internet is true.

Gilles de Rais has suffered more from Chinese whispers than almost any other historical personage, because fiction crept into his life story so early. Since no really accurate biography of him has ever been published, and since some of the most well-known factoids derive from fiction, there has never seemed any pressing reason not to just make things up. On the internet, moreover, we find an infinite number of bloggers and tweeters desperate for something to say, and in the six weeks separating the anniversary of his arrest from that of his death there seems to be a pressing need to copy and paste something about him that may or may not be accurate.

I had to reply to that bizarre fantasy -

They can never defend their whimsical assertions.

And finally the jewel of the collection, which seems to be an entry for a competition to make the most errors in the fewest lines of text - 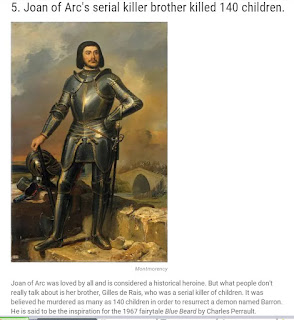 No doubt both families were astonished by these improbable siblings. Do note also Perrault writing in 1967 in spite of his extreme old age.

So be careful out there. Not everybody is telling you the truth.

(Names have been blurred to protect the stupid)

Posted by morbid morag at 18:26 No comments: