"But," Chantelouve went on, "there is one point which I never have been able to understand. I have never been able to explain to myself why the name Bluebeard should have been attached to the Marshal, whose history certainly has no relation to the tale of the good Perrault."

"As a matter of fact the real Bluebeard was not Gilles de Rais, but probably a Breton king, Comor, a fragment of whose castle, dating from the sixth century, is still standing, on the confines of the forest of Carnoet. The legend is simple. The king asked Guerock, count of Vannes, for the hand of his daughter, Triphine. Guerock refused, because he had heard that the king maintained himself in a constant state of widowerhood by cutting his wives' throats. Finally Saint Gildas promised Guerock to return his daughter to him safe and sound when he should reclaim her, and the union was celebrated.

"Some months later Triphine learned that Comor did indeed kill his consorts as soon as they became pregnant. She was big with child, so she fled, but her husband pursued her and cut her throat. The weeping father commanded Saint Gildas to keep his promise, and the Saint resuscitated Triphine.

"As you see, this legend comes much nearer than the history of our Bluebeard to the told tale arranged by the ingenious Perrault. Now, why and how the name Bluebeard passed from King Comor to the Marshal de Rais, I cannot tell. You know what pranks oral tradition can play."

From Là-bas by J-K Huysmans 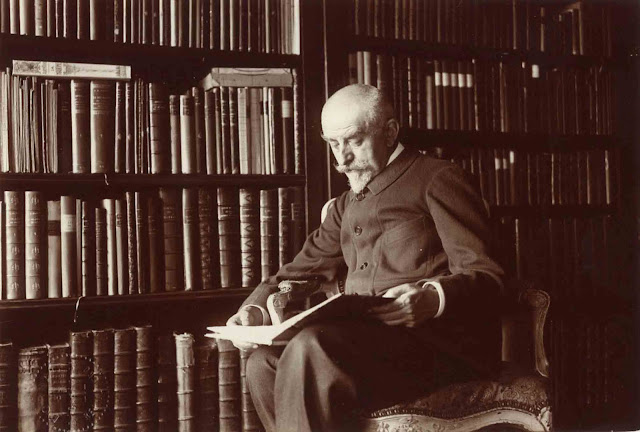 Joris-Karl Huysmans among his books, which did not include a reliable biography of Gilles de Rais

There is a complex relationship between the Abbé Bossard and J-K Huysmans. The latter's novel À Rebours, "the breviary of the Decadence", was published in 1884 and arguably his representation of his protagonist, Des Esseintes, influenced Bossard in his depiction of Gilles de Rais as an educated, refined aesthete. We know little enough of Gilles as a person, and to parlay his possession of a number of books into a love of literature is probably stretching the evidence; however, Bossard's attempt to show him as a cultured man as well as a warrior has been hugely influential. The Gilles de Rais we imagine today is essentially Bossard's creation. Without his intervention, Gilbert Prouteau would have been unable to present Gilles to a modern court as a man who announced the Renaissance.

When Huysmans himself wanted to make use of Gilles in a novel, he had little choice but to follow Bossard's narrative, padded out with juicy, mostly invented, details from the Bibliophile Jacob (Paul Lacroix). No other complete biography was available. Huysmans questioned almost nothing in his sources, and was responsible for spreading a number of mendacities that are still believed to this day.

The one point at which he drew the line was Bossard's ill-informed or mischievous attempt to link Gilles with the legend of Bluebeard, as we see from the above passage. The hero of  Là-Bas, Durtal, is researching for a biography of Gilles de Rais which never seems to be completed. Questioned about the Bluebeard connection, Durtal completely repudiates the notion. As an educated and well-read man, like the author he acts as a mouthpiece for, he knows that there is a far better claimant to the Bluebeard title in another local figure, Comorre.  Tactfully, he does not mention Bossard - " You know what pranks oral tradition can play".

Even Huysmans, who swallowed every word of the Bibliophile Jacob and unwittingly unleashed so many falsehoods on the world, could see that Bossard's Bluebeard thesis was a canard.

The English language version of Là-Bas is available here at Project Gutenberg, a great source of older and out-of-copyright books.