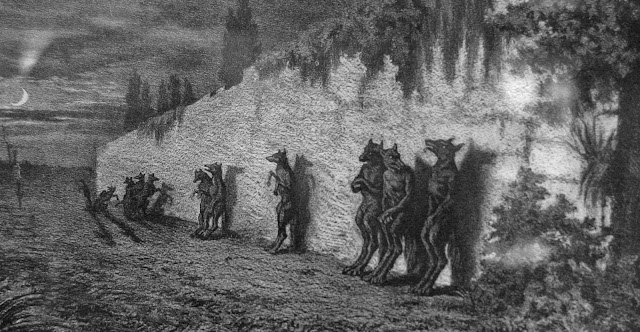 It is a given that all biographies of Gilles de Rais have been influenced by Paul Lacroix, the Bibliophile Jacob, either directly or indirectly. However, since there is no English translation of Lacroix's febrile prose, it is not easy for an English language blogger to underline the point.

Enter, with a roll of drums and clash of cymbals, the Reverend Sabine Baring-Gould. Writing his Book of Werewolves in 1865, he was clearly short of a few pages, and had the ingenious idea of padding it out with three lengthy chapters about Gilles de Rais. Of course, Gilles was no werewolf and Baring-Gould makes no attempt to show that he was; the only vaguely lycanthropic element is the extreme savagery of the alleged murders and the odd description of his features, which at certain moments become inhuman -

No one at a first glance would have thought the Sire de Retz to be by nature so cruel and vicious as he was supposed to be. On the contrary, his physiognomy was calm and phlegmatic, somewhat pale, and expressive of melancholy. His hair and moustache were light brown, and his beard was clipped to a point. This beard, which resembled no other beard, was black, but under certain lights it assumed a blue hue, and it was this peculiarity which obtained for the Sire de Retz the surname of Blue-beard, a name which has attached to him in popular romance, at the same time that his story has undergone strange metamorphoses.

But on closer examination of the countenance of Gilles de Retz, contraction in the muscles of the face, nervous quivering of the mouth, spasmodic twitchings of the brows, and above all, the sinister expression of the eyes, showed that there was something strange and frightful in the man. At intervals he ground his teeth like a wild beast preparing to dash upon his prey, and then his lips became so contracted, as they were drawn in and glued, as it were, to his teeth, that their very colour was indiscernible.

At times also his eyes became fixed, and the pupils dilated to such an extent, with a sombre fire quivering in them, that the iris seemed to fill the whole orbit, which became circular, and sank back into the head. At these moments his complexion became livid and cadaverous; his brow, especially just over the nose, was covered with deep wrinkles, and his beard appeared to bristle, and to assume its bluish hues. But, after a few moments, his features became again serene, with a sweet smile reposing upon them, and his expression relaxed into a vague and tender melancholy. 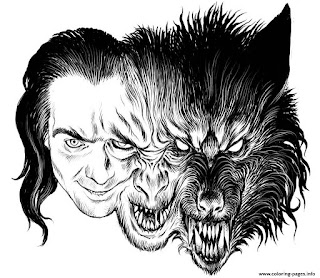 For Baring-Gould's purposes, this is sufficient proof of Gilles' wolfish nature. Without it, the book would have been some fifty pages shorter, which must have been a consideration.

Now, in 1858 Lacroix had printed his Grand Guignol version of Gilles' trial, which Baring-Gould mentions as an influence; the description of those lycanthropic facial contortions comes direct from the Frenchman's overheated imagination. On closer examination, the whole text is a condensed translation of the Bibliophile into English. In what would now be regarded as flagrant copyright theft, the Reverend merely stole his content from the earlier writer.

For Gilles de Rais it was a posthumous public relations disaster that a sensationalist hack like Lacroix was the first to pen a detailed account of his life, influencing both his first true biographer, the Abbé Bossard, and the scandalously popular novelist J-K Huysmans. The misfortune was compounded when Baring-Gould, one of the earliest English writers to address his case, swallowed the Bibliophile's fantasies piecemeal, including (as we see in the extract) the controversial identification with Bluebeard. Every contentious myth that makes the study of his life so fraught with difficulties can be found in this 19th century text: the description of his clothes, the prototype veiling of the cross, the characterisation of Poitou and Henriet, the Barbe Bleue connection...

The one consolation is that all this mythologising has left a clear trail, both in French and English, for anybody who wants to know the truth. The chapters in The Book of Werewolves are a useful aid for those who are interested in finding the truth about Gilles de Rais but whose French is not up to reading the Bibliophile in his entirety.

Read chapters X-XII in The Book of Werewolves
Or read the whole text of Paul Lacroix, the Bibliophile Jacob in French


Whichever you choose, it will be a revelation; those myth-ridden biographies, from Bossard to Bataille, will never be the same again.

Posted by morbid morag at 17:24 No comments:

Everybody who has heard the name of Gilles de Rais knows the outline of his story, together with a few mordant details. He was one of Joan of Arc’s captains, but after her death he went mad. He shut himself up in his gloomy castles and surrounded himself with alchemists and magicians. Having bankrupted himself on selfish pleasures, he attempted to create gold by alchemical means. When this failed, he turned to the Devil and held Black Masses at which children were sacrificed. Strange lights were seen in a tower, screams were heard and a constant pall of smoke hung over the castle. Wherever the Baron de Rais travelled, boys vanished, to the point where some villages had no children left at all. Eventually, the bereaved parents complained to the Bishop of Nantes and Gilles was arrested. The evidence at his trial was so lurid that at one point the bishop rose to his feet and veiled the face of Christ on the crucifix. A parade of mothers and fathers bore witness to the loss of their sons and daughters. Eventually Rais repented his sins and made a full confession, after which he was condemned, hanged and burned. He is remembered today as the legendary Bluebeard.

A striking story. As we shall see, barely a word of it is true. 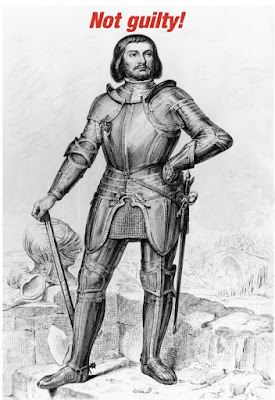 (This blog has gone part-time because of the pressing need
to write an English-language revisionist biography that will
go a lot further than Fleuret or Prouteau.
These are the first few lines of the introduction.)
Posted by morbid morag at 00:57 No comments: