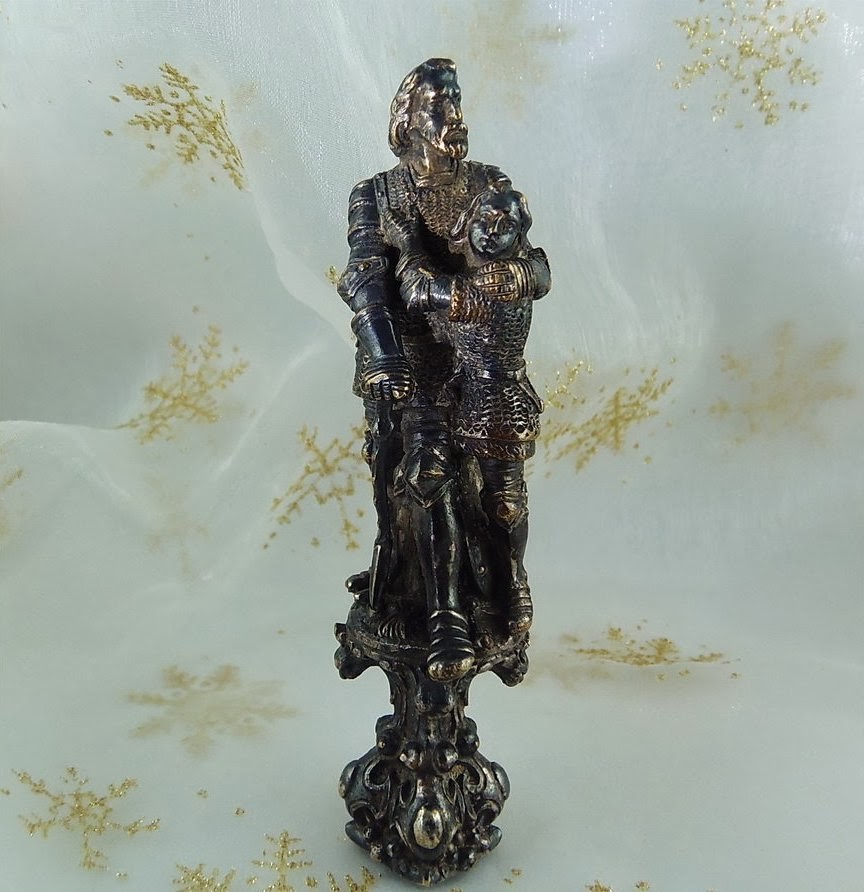 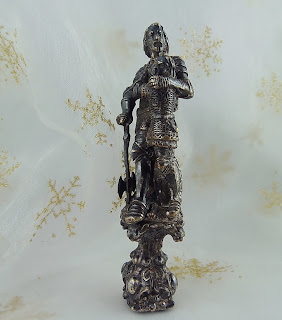 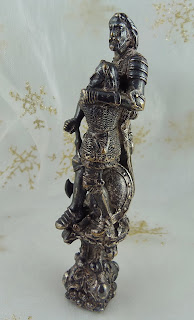 
This mysterious little object is a seal which may (or may not) depict Gilles de Rais and Jehanne d'Arc. There are no markings and the actual seal has been removed, making it impossible to date or place, although it was bought from vendors in Provence, France. It seems to be reasonably old and to have been used for its intended purpose, judging by the wear.

Looking at the iconography of the piece, it is highly likely that it is meant to represent Gilles and Jehanne. Both figures have fleur de lys markings on their armour. The taller figure is leaning on a double-headed battleaxe in what appears to be a deliberate allusion to Féron's imaginary portrait of 1835. He is bearded; Gilles is almost always depicted with a beard, uniquely among Jehanne's companions. The smaller figure is clinging to him for support; we know that Gilles rescued Jehanne on the battlefield twice and the second time she had a leg injury. This little piece might well represent that moment at the nadir of the Loire campaign when Paris had failed to fall, Jehanne was wounded and the next day Charles VII broke up the army, leaving both Gilles & Jehanne to go on alone to their respective fates. No wonder the male figure has such a solemn, melancholy air.

This would have been a controversial piece to own at any time, since Gilles de Rais is the dominant figure and Jehanne is leaning on him. It might have been made in the 1920s, when Jehanne was canonized and there was much revisionist interest in Gilles, or possibly in the late 1890s when Huysman's Là-Bas had such a succès de scandale. But to speculate further would be to make up fairy stories, like Bossard.

It is a beautiful object and it is posted here for its beauty and its rarity.

(The pictures and description were taken from the eBay listing. Obviously this item is now sold, but it was bought from this shop.)

Posted by morbid morag at 20:02 No comments: