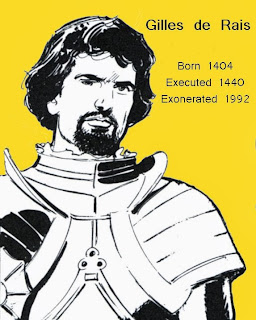 Light a candle,
drain a glass,
mark the moment.


(Original artwork by Paul Gillon)
Posted by morbid morag at 12:15 No comments:

The leather binding is curious,
soft and pale, of no known provenance.

Its silver clasps have tarnished into blackness,
grim as coffin furbishments.

The key is rusted red, like Bluebeard's key
indelibly stained with blood.

Inside, the pigments glow from the page
in formal miniatures: vermilion, gold.

Argent on a ground of sable
a unicorn rampant rears its horn.

Here is a serpent the size of a dog
and there a leopard with human eyes.

A heap of gold transmuting into leaves,
the heart of a child in a jewelled monstrance.

A black stake and a pile of kindling,
the white face of a virgin martyr burning.

A crowd looks on, as blank as playing cards.
The licking flames seem cool, like amber.

A human figure is split down its axis;
half gilded girl, half crowned and bearded male.

A hawk-faced Herod in his purple watches
the scarlet tableau of innocents slaughtered.

There are geometrical fountains of blood.
From the sky, blond angels look down, impassive.

A phoenix in his crimson glory poises
resurgent above a pyre of blackened bone.

Margot K Juby
Posted by morbid morag at 16:10 No comments: