In Rama was there a voice heard, lamentation, and weeping, and great mourning, Rachel weeping for her children, and would not be comforted, because they are not.
Matthew 2:18 King James Bible Authorized Version

The Chapel of the Holy Innocents has always been a rich source of the mythology that surrounds Gilles de Rais. Why, commentators ask, did Gilles name his private chapel after a group of murdered infants? Was it not a sign of guilt, or defiance? Why, in fact, did he have a private chapel at all, and go to such crazy lengths to ensure that his family could not dissolve it after his death? Surely that was extravagant at best, a bit mad at worst?

To ask these questions is to try and lift Gilles out of his context.

The story of the Massacre of the Innocents is based on a few verses in one gospel, Matthew 2: 16-18, which relates how King Herod attempted to kill his newborn rival as King of the Jews by having all the boy children born at the right time and place put to death: Then Herod, when he saw that he was mocked of the wise men, was exceeding wroth, and sent forth, and slew all the children that were in Bethlehem, and in all the coasts thereof, from two years old and under, according to the time which he had diligently enquired of the wise men. There is no further evidence for this massacre and it is almost certainly folklore.

From about 1400 onwards, the Holy Innocents were very much in vogue all over Europe. The brief account of Herod's massacre of the babies, coupled with the "Rachel weeping" verse from Jeremiah which the evangelist quoted, was widely used in sermons and mystery plays. The motif was particularly affecting in the context of a country embroiled in a seemingly endless war, which may explain its ubiquity. Many churches and chapels were dedicated to the child saints,  including one of the first churches built on the Rive Droite in Paris, and in following suit Gilles was merely indicating that he was a modern and fashionable man even in his spiritual tastes.

And the private chapel? Not as uncommon as you might suppose. The rich liked to have mortuary masses said for the repose of their souls after death. Some achieved this by bequeathing money to churches or monasteries, the wealthier ones founded their own chapels. The fact that Gilles took extreme measures to guarantee the continuation of his chapel merely shows that he had an astute and justifiable distrust for his family. 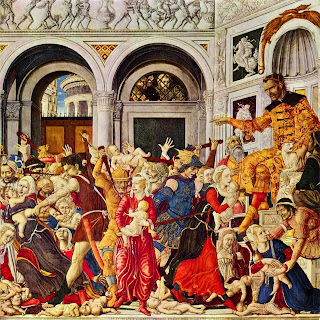 Posted by morbid morag at 01:14 No comments:

On June 17th 1992, The Guardian put a story headlined Second chance for Bluebeard on its front page. "More than 550 years after he was hanged and then burned" it began, with typical inaccuracy, "for offences ranging from sodomy to heresy, Gilles de Rais, Joan of Arc's companion in arms, is to be retried in an official process of rehabilitation." This came as a pleasant shock to those of us who had long believed that Gilles was the victim of a miscarriage of justice. A few months later, the verdict was announced: Not guilty. This made news worldwide; the account in The Guardian, and also The New York Times, can be read online. Gilles de Rais' sudden return to the limelight, and rehabilitation, can be put down to one man, Vendéen novelist Gilbert Prouteau, and one book: this one. 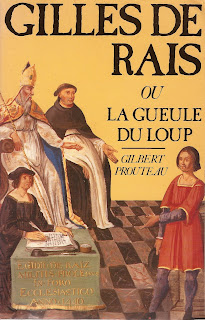 Prouteau's masterpiece of revisionist literature has been cruelly treated by history, through no fault of his. It is easily the most influential book about Gilles de Rais ever published, as it is essentially the case for the defence which was put to a special court of appeal under the auspices of UNESCO and led to his sensational acquittal. But the book and the retrial were in 1992, before the internet, and both are mostly forgotten today. Prouteau's book, which I understand was a best-seller in France, has never been translated into English and I have been unable to find any detailed online reviews.

It is a strange book, not obviously a "biography" in the usual sense, and not at all what the tourist board of Brittany expected when they commissioned it. It opens with a recalled rant by Prouteau's late mentor, the lawyer Maurice Garçon, who memorably claims that if he had to defend Gilles de Rais in court he would get him off with "six months with remission". Prouteau then goes on to relate how a local dignitary asked him to write a biography of Gilles de Rais to tie in with a new tourist trail. By implication, Prouteau jumped at the chance.

The resulting book is a curious mish-mash of fact and fiction. Some, including the spectacularly parti pris Jacques Heers , have accused him of writing a romantic novel. It is that, in part, but it is also a lot more.

The biographical/romanesque section of the book proceeds in an eccentric fashion, opening with a character assassination of Rais's nemesis, Bishop of Nantes Jean de Malestroit, an outline of the bad feeling between the two and the trap that the bishop set for his foe. This section ends with Gilles' arrest and Malestroit arranging to have the heavy-drinking nobleman deprived of alcohol in order to weaken his resistance to interrogation.

The book then segues into a romanticised sketch of Gilles' life, written by Gilles himself as he languishes in the Tour Neuve at Nantes. In a way, this is the book the tourist board wanted for their wretched "circuit touristique" - we have the lonely boy wandering the grim castle, the parental neglect, the mother who abandons him (although it is more probable that she predeceased her husband) and, above all, the fallacy of the two young fianceés who both die, thus adding an atmosphere of doom and nodding to the spurious Bluebeard myth.

In the next section, Gilles is still writing, this time long letters to Pierre de l'Hôpital, President of Brittany and representative of the civil court. With much justification, Prouteau felt that Hôpital was sympathetic to Gilles and unconvinced of his guilt. These passages are intercut with extracts from the trial, which Gilles comments on. The final letter is followed by the words "Fin du journal apocryphe de Gilles de Rais" and a few pages describe his execution.

This is not, however, the end of the book. The most interesting section is still to come: it is titled "J'Accuse", in a very clear reference to the Dreyfus case, and it deals with Prouteau's attempt to have Gilles de Rais' name cleared. He sought out the aid of a barrister friend, Jean-Yves Goeau-Brissonnière, who agreed to represent Gilles in court at a specially-arranged tribunal, the details of which are frustratingly vague, and the next sixty or so pages record the peroration that Goeau-Brissonnière delivered before the court. Touchingly, we are not given the verdict; if the book had been held back from the publishers for a few months, it could have included the spectacular triumph of Gilles' acquittal. It seems that Prouteau did not really expect this result and wished to market the book on the sensation of the retrial, believing that the verdict would be a damp squib.

For all its dramatic effect in the real world, this is an imperfect work: Prouteau does, in the romanesque section, print the legend and to some extent play into the hands of the Vendéen tourist board, with their accursed son et lumière and "Sur les Traces de Gilles de Rais" nonsense. He does not cite his sources, so his extraordinary claim that Gilles was an alcoholic who was deprived of his drug in prison in order to extract a false confession from him can neither be challenged nor confirmed. And he does make the mistake of accepting certain parts of extorted evidence as gospel truth, which puts him in the unnecessary position of having to pen a defence of paedophilia.

Still, this is the book that forced France, if not the rest of the world, to look at her prodigal son in a new light. In this new century, one sees its influence on web sites and coffee table books even in the anglophone world. Few books have had such a resounding effect as this one, and it is worth the read, even for those of us who struggle with French as a second language. A translation seems unlikely so long after the original publication, but if one were forthcoming it would certainly repeat its success in a new market.

Gilbert Prouteau lived till the advanced age of ninety-five and died on August 2nd 2012, a round twenty years after La Gueule du Loup was published and Gilles de Rais acquitted. Shamefully, his death barely caused a ripple outside France. Let this book and its reverberations in the real world be his memorial.

Posted by morbid morag at 23:26 No comments: