For the full text of the verse drama, click this link: Le Mistère du Siège d'Orléans. This is the start of the  Mistère itself; earlier pages have a dramatis personae, a summary and a lengthy introduction in French. 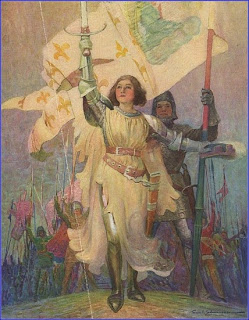 Posted by morbid morag at 14:46 No comments:

Google gets it right

An attentive reading of the trial records turns up any number of  contradictions, discrepancies, and suspicious similarities. It is apparent at many points that these are not spontaneous statements but responses to set questions. The text is a deliberately repellent combination of ugly images and tedious repetition; hardly anybody reads it thoroughly, it begs to be skimmed over.

Perhaps somebody at Google actually read it and categorized it accordingly.

Sadly, the likelihood is that it is merely a happy error.
Posted by morbid morag at 00:14 No comments:

People ask why I am so convinced that Gilles de Rais was the victim of a miscarriage of justice. This is why.

The myth of Gilles de Rais has lasted over five hundred years. In this myth, the wealthiest man in France, who happened also to be one of his country´s greatest warriors, suddenly went mad and commenced the wholesale abuse and butchery of children. No real explanation has ever been given for this, apart from trauma caused by the execution of Jehanne d´Arc.

The biographers who believe that he was guilty argue that there was overwhelming proof, human remains were discovered in his castles, the trial was fair and the judges above reproach, a host of bereaved parents came forward with evidence against him, he and his accomplices confessed freely and without torture...

None of these statements is true.

Not one piece of solid forensic evidence was found, not one single bone. Tradition speaks of suspicious ashes in a hearth and a child´s bloodied shirt - but ashes are what you expect to find in a fireplace, and both the ashes and the shirt were found, not at Machecoul, but at the lodging-house of Gilles´ chief alchemist some distance away from the castle.

The court alleged that Gilles had committed around a hundred and forty murders in fourteen years - ten a year. In his confession, Gilles insisted on eight hundred murders over eight years - a hundred a year, almost two per week.

In spite of these huge numbers, and a lengthy enquiry by the Bishop of Nantes, only forty-odd cases could be found. Of these, several were anonymous and only a dozen have a full name given. The hosts of parents amounted to sixteen - the number of missing children who were attested to in court by a mother, father or both. A couple more were represented by aunts or uncles.

I repeat that this was after a full enquiry by the Bishop, another by the civil authorities, and a further appeal for witnesses while the trial was in progress. Many of the cases produced in court were hearsay, anecdotes that had no relation to Gilles at all, and were clearly introduced only to bulk up the numbers. There is no indication whatsoever that more children vanished in this particular area and time than anywhere else in Brittany during this period.

Nor was the trial remotely fair. Gilles was not originally told all of the charges he faced; believing that he was arraigned solely for heresy, he was thus duped into accepting the Vice Inquisitor Jean Blouyn as one of his judges. His anger when he realised how he had been deceived was perfectly understandable - up to this point he had been a model of politeness and calm. Moreover, as he pointed out to Pierre de l´Hôpital, President of Brittany, the ecclesiastical court was acting beyond its remit; it was wholly inappropriate for charges of abduction and murder to be heard there rather than in the civil court. De l´Hôpital seems to have had grave misgivings about the legality of the proceedings and Gilles´ culpability; not only did he allow the condemned man several unheard-of favours at the end, he also neglected to sign the pages of the transcript that contained Gilles´ confession, as he was obliged by law to do.

The judges, too, were not as impartial as they ought to have been in a capital case. Jean de Malestroit had engaged in numerous business deals with the accused, buying his estates at knockdown prices. He was the cousin of Jean V, Duke of Brittany, who had also illegally bought properties from his vassal, including the strategic border castles of Champtocé and Ingrandes. These fortified castles were vital to Brittany´s defence and Jean V´s father had coveted them before him.  Although the Duke finally obtained them, when Gilles´ finances were on the verge of collapse and he could no longer hold on to them, they were sold on condition that Gilles could repurchase them within six years if he wished. Neither Jean V nor de Malestroit was willing to risk such an eventuality, and they knew that Gilles was attempting to restore his fortune by means of alchemy.

As well as this financial motive, there was a political one. Gilles was the pre-eminent warrior of the Loire campaign, after the Pucelle. He was tried in Brittany, which was an independent duchy, allied sometimes with France and at others with England at the whim of the Duke´s politique de bascule. Although Jean V vacillated constantly, de Malestroit consistently favoured alliance with England, which he correctly supposed to offer the best chance of Brittany maintaining its independence from France. Jehanne had already been disgraced and burned, but the charges of heresy against her had failed to stick and she was still regarded as a quasi saint in France and especially in Orléans. If her protector, the brave Marshal of France, could be thoroughly smeared, found guilty not only of heresy but also of black magic, sodomy, murder and offences too disgusting to be described, then her memory might be tainted by association.

Gilles´ confession was not, as the Inquisition formula has it, given freely and without torture. His two servants produced evidence so consistent, and so outlandish, that it could only have been extracted by means of torture. Gilles´ evidence follows theirs exactly - we do not know if he was tortured, though he may have been, but he was excommunicated, which terrified him, and explicitly threatened with torture.

Finally, the reaction of the crowd to Gilles´ condemnation was not to exult and jeer. There was a solemn procession to the gallows and the people wept and prayed for his soul. Those who insist on his guilt claim that the fifteenth century was a more Christian time and a more forgiving one; so forgiving, evidently, that Gilles was buried in a cathedral and the expiatory monument commissioned by his daughter was a place of pilgrimage for three hundred years, until it was destroyed in the Terror. Women would pray there for abundant milk to feed their babies and their prayers, apparently, were answered. All this seems a very strange reaction if they really believed that the dead man had preyed on local children and, among other things, eviscerated them and masturbated over their entrails.