According to the splendidly wrong-headed D B Wyndham Lewis, the rehabilitation of Gilles de Rais is a purely 20th century chimera. "It seems hardly necessary to add that one or two fervent friends of Progress have...established to their own satisfaction Gilles' entire innocence, which occurred not even to his own proud, shamed family." In a footnote he adds "Nor to anyone else until 1902."

Leaving aside the rather glaring fact that Gilles' daughter Marie and her first husband made a determined effort to establish her father's innocence, as Wyndham Lewis himself records, the first writers to assert that he was the victim of a plot were, improbably, political commentators during the Revolution.

One might assume that, to the Revolutionaries, Gilles would have been the paradigm of the wicked baron, preying on his vassals in the worst possible way. After all, both his tomb and his monument were destroyed during the Revolution. However, Gilles was not singled out for special treatment - he was buried with the nobility and the heroes of Brittany and every tomb was desecrated  and the church razed. Some Revolutionary writers certainly did see Gilles as a villain, but others saw him as a victim of a plot by the Church -

Le maréchal de Rais, à l'instant de son supplice, reprit tout sa dignité, il reprocha aux juges leurs bassesse et leur avidité, et marcha à son supplice, non pas en coupable, mais en héros.
[The Marshal de Rais, at the moment of his execution, recovered all his dignity, he reproached his judges for their baseness and their greed, and walked to his execution, not as a guilty man, but as a hero.]

These are the words of Joseph La Vallée, writing in 1792. He is quite explicit: Gilles was ruined by charlatans and forced to sell his estates cheaply to the Duke of Brittany. When he was bankrupt, the Duke and the priests accused him of "impossible crimes", when his true crime was having no more money to lavish on them. Two hundred years before Gilbert Prouteau, La Vallée put the case for Gilles' innocence in a nutshell

We should not assume that revisionist views about Gilles' guilt appeared out of nowhere in the twentieth century; they have run like a golden thread through history, from the moment of his death until the present day, appearing in the unlikeliest of places.

Posted by morbid morag at 16:23 No comments:

One of the most striking oddities in the trial of Gilles de Rais is the deafening silence from members of his household. We are given the forced confessions of his body servants and the self-extenuating words of Prelati and Blanchet, but of his two hundred-strong army, the members of his chapel (including the allegedly abused boys in the choir) and the various other pages, squires and sundry domestics who lived at close quarters with him, we hear nothing. Surely somebody would have noticed something incriminating? Surely, for instance, the porter at Machecoul could have been summoned to court and asked to explain exactly what he imagined was going on when an elderly crone handed young boys into his care? And, although he was no longer in Gilles' choir, it would have been interesting to hear from André Buchet, who could have told us if he was sexually assaulted and might even have answered questions about whether, when Gilles was at Vannes, he supplied him with a boy for purposes he knew all too well. Buchet would have been easy to find, as he was employed by the Duke of Brittany...

The one voice speaking up for Gilles' entire household is that of a certain André Brechet, a soldier in the garrison at Machecoul. But Brechet has nothing to say about lost children, strange sounds or foul-smelling smoke. Instead we are treated to a completely irrelevant anecdote about standing sentry duty on the ramparts at Machecoul. He was clearly not a good watchman, as he fell asleep. He was woken by a small man, a stranger to him, who threatened him with a dagger & told him "You're dead." However, the stranger did him no harm and went on his way, leaving the hapless sentry in a muck sweat. The next day, Brechet met Gilles de Rais on his way to Machecoul. And, he tells us, he no longer dared keep watch at Machecoul, which must have been an easygoing kind of garrison where soldiers could pick and choose their duties.

What are we to make of this tale? It sounds as if somebody played a prank on the sleeping soldier and frightened him badly. It has no relevance to Gilles or to the charges against him - he was not even at Machecoul, since he arrived the next day. The small man with the dagger was unlikely to be one of Gilles's friends, as Brechet would have known them by sight and his testimony is firm that the man who threatened him was not known to him.

The only purpose this slight anecdote serves is to give the impression that Machecoul was a sinister place where uncanny & quasi-supernatural events were commonplace. And also, of course, to pad out the testimony with more meaningless and unsubstantiated verbiage. 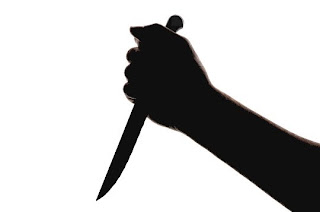