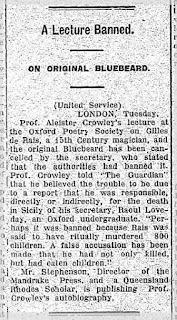 On February 3rd 1930, Aleister Crowley was scheduled to give a lecture about Gilles de Rais to the Oxford University Poetry Society. The lecture was never given; it was printed as a pamphlet instead and is now universally known as The Banned Lecture. It is readily available online and regularly reprinted

Was this some artful self-publicity on Crowley's part or was it really banned? It seems that it was, by the Catholic chaplain, Father Ronald Arbuthnott Knox; alternative arrangements were made for the lecture to be given off-campus, but Knox threatened sanctions against any student who attended and so cancellation was the only option.

The reason for the ban is not clear. In the unlikely event that Knox had seen a draft of the lecture,he would certainly have been outraged by Crowley's thesis that "Gilles de Rais was to a large extent the victim of Catholic logic. Catholic logic: and the foul wish-fantasms generated of its repressions, and of its fear and ignorance." However, he is more likely to have taken exception to the identity of the lecturer, the subject of the lecture, or the horrible combination of the two - the Wickedest Man in the World expatiating on the supposed monstrous child-killer Bluebeard must have been the stuff of nightmare for a staid Oxford chaplain.

Crowley reacted with amusement. He told a reporter: "Perhaps the refusal to let me lecture has come because Gilles de Rais is said to have killed 800 children in ritual murder, and in some way this was connected with myself, since the accusation that I have not only killed but eaten children is one of the many false statements that have been circulated about me in the past. Probably the authorities are afraid that I may kill and eat 800 Oxford graduates."

Having had his little jest, he went on to make a serious point, and make it unequivocally: "The main point about my lecture was to show that the allegations against Gilles de Rais were unfounded, just as they were against Joan of Arc. Those were curious times, and anyone was liable to be burned as a witch on the least evidence."

Crowley loved to provoke, and certainly his vanity would have been piqued by the thought that a Wickeder Man in the World than himself may have existed, but one feels that he was genuine in his defence of Gilles de Rais. His lecture  is frivolous and drifts around in a stream-of-consciousness manner - no doubt it would have been delightful to listen to him deliver it in person - but there is a steely logic underlying it and he makes several telling points. "Did the disappearance of the first four hundred, say, put no parents on their guard?" he asks, disingenuously, and one does wonder why so few apparently intelligent historians over the years have asked that obvious question.

It should be remembered that Crowley did not prepare his lecture in a vacuum; no doubt he was inspired by an attempt to rehabilitate Gilles only a few years earlier, spearheaded by Salomon Reinach and Maurice Garçon. It was widely reported at the time but is now virtually forgotten; only Crowley's apparently ephemeral "banned" lecture remains as its memorial