For the sake of completeness, here are the 1992 newspaper cuttings from The Guardian and The Times announcing the retrial of Gilles de Rais. The Guardian story that gave the verdict is already on this blog, here. 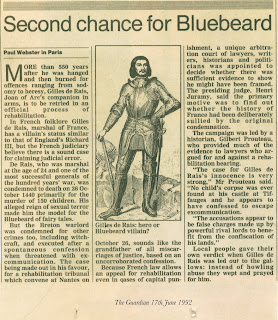 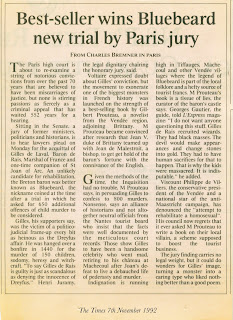 Posted by morbid morag at 16:45 No comments:

The Algebra of Need: was Gilles an alcoholic?


According to Prouteau in Gilles de Rais ou la gueule du loup, Gilles was an alcoholic who drank five litres of hippocras per day. This was wine fortified with spices and herbs and, at 20% by volume, twice the strength of ordinary wine. When he was imprisoned, his supply of alcohol was cut off and he was given nothing but water to drink, thus precipitating him into an attack of delirium tremens and rendering him highly susceptible to suggestion. It also meant that the court had in its gift the two things that Gilles could not live without: alcohol and the consolation of the Church. As soon as he admitted to the offences he had been charged with, he would be given hippocras and his excommunication would be revoked.

This is a seductive theory; if Gilles was an addict deprived of his drug, he would have admitted to anything to have it restored to him. As William S Burroughs described the Algebra of Need: "In the words of total need: 'Wouldn't you?' Yes you would. You would lie, cheat, inform on your friends, steal, do anything to satisfy total need. Because you would be in a state of total sickness, total possession, and not in a position to act in any other way."  Also, a man in the throes of the DTs and hallucinating would be easy to convince that he had, in fact, done the most outrageous things. However, one has to treat it with caution. Apart from the script that Gilles was made to read about the excesses of his life and the exaggerations of the Mémoire des Héritiers, both highly suspect documents, there is no real indication that Gilles was dependent on alcohol. He may have been a fairly heavy drinker who suffered from forced abstinence in prison, but there is no proof that his gaolers deliberately withheld wine from him in order to break his will, although they certainly would have done if they had thought it would help to brainwash him.

This theory has to be regarded as unproven, but it is hardly needed to explain why Gilles de Rais, after refusing for so long to submit to the will of the court, underwent a complete change of character overnight. He had seen the evidence against him. He knew that it had been extracted by torture and that, subjected to the same torture, he would inevitably break and recite the same litany of atrocities. He knew that he would be condemned and executed. He believed that if he went to his death contumacious and excommunicate, he would be plunged into Hell forever. And so he took the only option that would minimise his pain both in this world and the next; he ate humble pie and read the confession that had been prepared for him and that is so clearly based on the forced testimony of Henriet and Poitou, even though that would inevitably lead to shame and death, because shame and death were infinitely preferable to torment on earth that would continue for eternity in Hell. 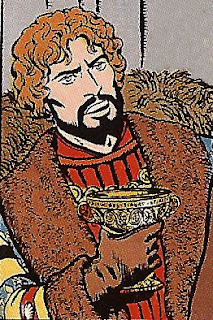 (Interestingly, although it is not too difficult to find images of Gilles feasting, representations of him drinking are vanishingly rare.)
.
Posted by morbid morag at 16:24 No comments:


Up until what Leon Daudet called the Stupid Nineteenth Century, although Gilles de Rais was seen as a murderer, he was at least given his due as a military leader. But then a rather Manichean world view took hold: everything was black or white and a man who killed children could not possibly have any redeeming features. Thus Gilles was quietly removed from the history books, to the point where Vita Sackville-West dismisses him in a footnote and Bataille argues that, really, he was not that great a commander. This would be an injustice even if he was guilty, which he was not. 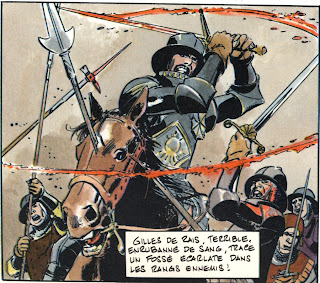 Gilles de Rais began his military career at the age of sixteen in the battle between the Monforts & the Penthièvres - in a breach with his family tradition, he and his grandfather took the side of the kidnapped Jean de Montfort, the Duke of Brittany who was to betray his friendship so spectacularly. He acquitted himself so well that he and his grandfather were singled out for praise and reward by de Montfort.

He first distinguished himself in the war against the English at Lude, where the garrison was commanded by Captain Blackburn, who had sworn to defend it to the death. And so he did: Gilles was among the first to storm the castle, took on Blackburn in single combat & killed him. At that time, Gilles was twenty-two years old.

His part in the siege of Orléans and the Loire campaign was glossed after his disgrace; for example, at Jehanne's rehabilitation trial in 1455, only Dunois mentions him as a leading commander at Orléans. Contemporary chroniclers, however, both French and foreign, tell a different story. He is seen as pre-eminent among the commanders, often at the expense of the others. His name is always linked with Jehanne's at Orléans and a private letter indicates that he was on good terms with her.

Gilles was entrusted with Jehanne's safety at her own request. He took his duties seriously; on both occasions when she was wounded, he hurried to her side, took her to safety, and stayed with her. The reason that he was not present at Compiègne when she was captured was that the King had disbanded the army to pursue peace with England; Jehanne was acting on her own initiative and it may be significant that she fell into enemy hands as soon as her protector was absent.

As we have already seen, it is certain that he and Dunois intended to launch a rescue attempt when they were at Louviers, in occupied Normandy, just across the river from Rouen where Jehanne was imprisoned.

Apart from Jehanne herself, nobody was more covered in glory than Gilles. He was made a Marshal of France in his twenty-fifth year. He was one of the four knights who fetched the Holy Oil from Saint-Rémy to Rheims; some chroniclers of the time give this honour to Gilles alone. He was also, along with Jehanne and her family, given the right to add the French arms, a border of royal fleurs-de-lys, to his armorial bearings; this was a phenomenally rare honour, more often granted to towns than to individuals.

Nor did he, as is popularly supposed, retire to his estates sulking after the capture and death of Jehanne; he continued to campaign for some years after, although apparently with diminishing enthusiasm. As late as 1439 he was still concerned with the struggle against the English, as was apparent when he espoused the cause of the False Pucelle, Jeanne des Armoises, and briefly put her in charge of his troops.

Whatever one chooses to think about the guilt or innocence of Gilles de Rais, dismissing his military achievements is not an option. It is doubtful whether Jehanne's Loire campaign could have succeeded without his strategic genius and reckless courage.