Wrongly, unduly and without cause 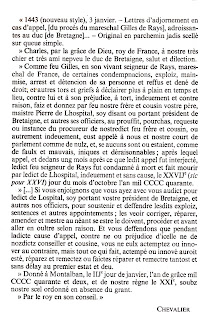 Dated January 3rd 1443, the letters patent from Charles VII to Pierre de l'Hôpital and François I (who had succeeded Jean V as Duke of Brittany), summoned them to the Parliament of Paris to account for the wrongful execution of Gilles de Rais. The letters were never acted upon and were probably suppressed for political reasons. Even through the old French, the strength of the language comes across. Reference is made to the "seizure, arrest & detention of [Gilles'] person and refusal and denial of justice, and other wrongs and grievances to be declared more plainly at the [appropriate] time & place, against him and to his prejudice, wrongly, unduly and without reason"; later we read: "The said late Lord de Rais was condemned and put to death by the said de l'Hôpital, unduly and without reason." There is no sitting on the fence; Gilles has been wronged, the King says, and restitution must be made. And indeed, subsequently Gilles' confiscated estates were restored to his daughter, Marie de Rais, an eloquent gesture that seems to be at least a partial rehabilitation.


As yet another new web page insists that Gilles de Rais must have been guilty because "some time after the trial" fifty human skulls were discovered at the château of La Suze-sur-Sarthe, let us nail this persistent canard once and for all.

There were no skulls, bones or any other human remains found at any of Gilles de Rais' castles at any time. Even Bossard, that fausseur évangile as Prouteau calls him, balked at promoting this myth. He mentions it, but dismisses it as being on a par with the legend of the young girls (girls!) freed from the dungeons. It never happened. And Bossard would have loved for there to have been bones; if there had been, he would have gleefully reported it.

The sum total of forensic proof against Gilles amounted to: -

A bloodied and foul-smelling small chemise found, not at the château, but at the house on the outskirts of Machecoul where Eustache Blanchet lodged along with Francesco Prelati.  Hardly evidence against Gilles.

Some "suspicious" ashes found in the hearth at the same house. But, as Prouteau says, they might just as well have been from a suckling pig.  Ashes are what you expect to find in a hearth.

This seems very little to show for hundreds of murders. Where were the severed heads that Gilles was supposed to keep as trophies?

I repeat: there was no forensic proof against Gilles whatsoever. No credible witnesses. And a forced confession. 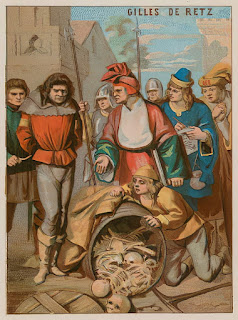 
[Incidentally, the château of La Suze-sur-Sarthe did not belong to Gilles. Perhaps there is some confusion with the Hôtel de la Suze. But that was not a castle, it was a house in the centre of Nantes and would have lacked the extensive souterrains for the storage of multiple cadavers.]