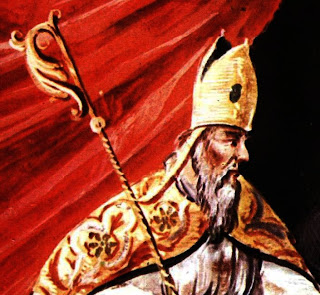 Although Jean V is hopelessly tainted in most biographers' eyes, because of his cupidity, his underhand financial dealings and his two-faced pretended friendship with Gilles de Rais, attempts are often made to whitewash Jean de Malestroit, the Bishop of Nantes. Bossard in particular makes him out to be a paragon, if not a saint, and consequently the trial that he presides over is fair, humane and generous.

For Gilbert Prouteau, on the contrary, Malestroit is positively satanic and the prime mover behind the plot to make away with Gilles and seize his estates.

Where does the truth lie?

Politically, he did not trim his sails to every passing wind as Jean V did; he led more than one embassy to London and was a lifelong and passionate Anglophile. Or, as Vallet de Viriville expressed it some 400 years later, "a traitor sold to the English". This is rather unfair to Malestroit, as Brittany was an independent duchy and its best interests arguably lay with the English rather than the French. He was, nonetheless, a natural enemy of the French war hero Gilles de Rais.

He also had a history of enmity towards Gilles' friends, and possibly towards Gilles himself. In 1426 the French attempted to liberate Saint-James-de-Beuvron, a small town on the Norman border. They failed because of some treachery on the part of Malestroit, who had been negotiating with the English on behalf of Brittany and had been gifted, or as one might say bribed, with a pension and lands in Normandy. Arthur de Richemont was so furious at this betrayal that he pursued Malestroit and had him flung into prison; but either the Bishop was seen as a fat ransom, or he was too useful to the duchy to lose and Jean V had him released. There is no evidence that Gilles de Rais fought at Saint-James-de-Beuvron or that he met Malestroit at that time, although most writers, including Bossard, agree that he was most likely present. More important is that he was a close ally of de Richemont and non-revisionist biographers have speculated that Gilles was collateral damage in an attempt to harm his reputation. Gilbert Prouteau's tableau of Malestroit encountering Gilles and seeing death in his eyes because he knew that if Gilles had his way he would be hanged as the archetypal collabo is a fantasy, but founded in emotional truth. Malestroit would certainly have known how Gilles dealt with traitors.

At a later date, as a result of a financial dispute between the Duc d'Alençon and his uncle, Jean V, Malestroit (in his capacity as Chancellor of Brittany) was kidnapped by the former and eventually imprisoned in Pouancé in Anjou. Jean V called upon the English for aid, which led to a minor invasion of Anjou and the release of Malestroit. This was at a time, autumn 1431 to spring 1432, when Gilles de Rais was not in Brittany, but d'Alençon was a friend of his and used several of his castles as bases while he was moving Malestroit around the country, presumably with his consent.

Malestroit also bought several properties from Gilles, so was hardly a disinterested judge. The Mémoire des Héritiers says that Gilles sold "To Jean Malestroit, Bishop of Nantes, the chateau and lands of Prigné, of Vue, Bois-aux-Treaux in the parish of Saint-Michel-Sénéché, and un grand nombre de terres situés dans le clos du pays de Rais pour une somme énorme." He also bought Brégny, but never paid for it, handing over only a promissory note.

The family motto of the Malestroits was Non male stridet domis quae numerant numas - It is not unpleasant to hear the sound of coins being counted in one's own house. Not inappropriate for a man described as "acquisitive" even by biographers who favour him. He had a financial, political and personal interest in the outcome of Gilles de Rais' trial and should never have been allowed to preside over it.
Posted by morbid morag at 19:06 No comments:

I have no idea why, on August 13th 1944, The Milwaukee Journal felt it incumbent upon itself to publish a lengthy article about Gilles de Rais. But here is the article, wordily sub-headlined For 300 Years, French Worshiped at Tomb of Monster of Brittany Who Sacrificed 200 Children in Sadistic Rites to Propitiate the Demons. See my last post, The B Word - this is another strong indication that for many years after his death,  Gilles de Rais was seen as a quasi saint rather than a monstrous Bluebeard figure. 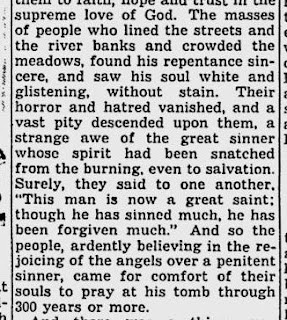 Posted by morbid morag at 11:49 No comments: