This is how UK national newspaper The Guardian reported Gilles de Rais' acquittal twenty years ago. It should be taken with a large pinch of salt; as you see he is hanged and burned in the first column and by the fourth he is disembowelled, a new embellishment. The passage about Gilles being given vast quantities of strong wine while imprisoned is also garbled. Prouteau's argument is that he was first, as a heavy drinker and possible dipsomaniac, deprived of alcohol completely for a long period and then allowed to drink all he wanted. This would certainly have deranged his senses to the required degree, but although Prouteau was given access to all the trial records, he does not back up this extraordinary allegation.
Posted by morbid morag at 14:27 No comments: 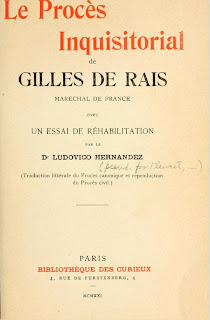 Bossard, in trying to date the Mystère du Siège d'Orléans, goes to great lengths to establish that it must have been written and staged prior to Gilles de Rais' disgrace in 1440. After that time, he insists, the playwright could not have shown Gilles at Jehanne's side, praised by her as one of her nobles, vaillans princes gentilz, and playing a decisive part in her victory. Nor would any audience have tolerated the spectacle.

The picture below was published in International History Magazine in 1974. It shows a pageant in honour of Jehanne d'Arc and riding by her side is a dark, bearded figure who clearly represents Gilles de Rais. So, although Gilles was expunged from French history books and, indeed, from many contemporary chronicles for reasons that Bossard makes all too plain, evidently he has always played a part in local celebrations. Orléans celebrated its liberation yearly and Gilles was a principle agent in that victory. He was fond of Orléans, once spending almost a year there, and the Orléanais were fond of him, and bought his standard to use in their reenactments. His reputation there was that of a hero and a generous patron of the arts. It seems quite likely that, in the general disbelief at his fall from grace, the Orléanais were likely to be more cynical than most and that he would have kept his place in the annual celebrations, as he does today.

Posted by morbid morag at 02:40 No comments: