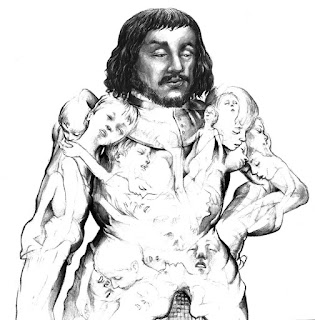 On the face of it, just a particularly ingenious uglification of the Feron portrait of Gilles de Rais, by Joseph A Smith.
However, it illustrates the book Witches by Erica Jong, and what Jong has to say about Gilles de Rais is borderline revisionist -
Most history books slavishly repeat the charge that Gilles de Rais was a sexual deviate who murdered young boys in satanic rites. It is rumored that he practiced black magic in the hopes of restoring a squandered fortune.
Like Joan's, his story serves many purposes. A valiant soldier and nationalist hero, he was instrumental (with Joan of Arc) in bringing about the victory of Charles VII. He was Joan's protector in battle and shares with her the glory of having turned the tide in the Hundred Years' War.
Yet, ten years after Joan's trial for heresy, he too was charged with heresy. When he determined to refute that charge, he found himself charged with sodomy and murder. In the language of the accusation against him by the ecclesiastical authorities, Gilles de Rais was said to be "heretic, sorcerer, sodomite, invocator of evil spirits, diviner, killer of innocents, apostate from the faith, idolator."
He was threatened with torture, but it is not clear whether torture was used or not. (Joan of Arc was not physically tortured, though she was chained, confined, and subjected to mental anguish.) In any case, it is notable that not long after being charged, he made a complete about-face from hauteur to humility, confessed to having killed at least eight hundred children, and went to his death in great penitence, having twice been excommunicated as a heretic and apostate.
Margaret Murray claims that the evidence against Gilles de Rais was clearly trumped up, and that he, like Joan, was simply a member of the Old Religion, a leader of the Dianic cult. She suggests that his death was again the ritual sacrifice of one whom the people saw as the incarnate god or Divine King. According to Murray, the deaths of Joan of Arc and Gilles de Rais were substitute sacrifices that ensured the continued reign of the French kings: the deaths of two token kings in lieu of the real ones. This is an attractive theory, but we do not have enough clear evidence either to accept or deny it. What is interesting, however, is what these two examples teach us about the nature of received historical wisdom. Since all the contemporary chroniclers told the stories of Joan and Gilles from an ecclesiastical point of view, we can only speculate about a possibly pagan interpretation of the facts, and consequently we will probably never really know the truth about these figures.
Murray writes with an antiecclesiastical bias; the histories err in the other direction. From the stories of both Gilles and Joan, we learn only that what is usually called "history" is merely what the rulers of society have deemed to be true. In order to find out what really happened, we must go to other sources - census figures, account books - data set down with relative neutrality, if these indeed still exist. With Joan of Arc and Gilles de Rais, even the bare facts are in dispute. But the historian's loss is the poet's or playwright's or novelist's gain. Joan and Gilles are ideal figures for poetic interpretation because their stories can be made to serve a variety of imaginative ends.
Erica Jong - writing in the early 1980s, before the contentious 1992 rehabilitation of Gilles de Rais - allows the reader to make up his or her own mind. What a pity her illustrator felt unable to do likewise.
Posted by morbid morag at 15:45 No comments:

The Monsterisation of Gilles de Rais

This is the whole of the cartoon by Steve Vance/Eddie Newell that I referred to in the Common errors post at the end of last month. It is an excellent example of how Gilles de Rais is monsterised throughout the media. Note how, after the first page, he appears to be in his forties or fifties, in spite of having died in his thirty-sixth year. Even the excellent Paul Gillon falls prey to this fallacy, making Gilles look much older than Jehanne, when in fact there was only seven years between them. He is also shown as gluttonous and grossly overweight, although the only evidence we have for this are the pious platitudes attributed to him at his trial. Monsters have to be as ugly outside as they are inside, otherwise how would we recognise them? A handsome ogre would turn the moral universe upside-down. 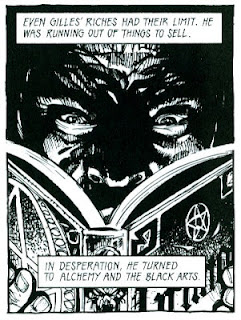 [But do click on the link to the cartoon, anyway. If you missed it, here it is again.]

Posted by morbid morag at 17:06 No comments:

This article was published anonymously in Curious, a sex magazine, in the early 1970s. At that period, just after Pierre Klossowski translated the full trial records into French for the first time, scepticism was growing about the validity of the charges against Gilles, and the anonymous author reflects this. It is an excellent article overall; there are a few errors, but it is a better account than the average rawhead and bloody bones web page.
Because this is a photocopy of a magazine article it is not easy to present online in a readable form. It is given here in both html and pdf formats.
Curious, pdf document
Curious, html document
Posted by morbid morag at 18:40 No comments: