Gilles de Laval, Lord of Rais 1404-1440, Arrested for his Strange Crimes by Lucien Napolean Francois Totain, 1838-1900
Gilles de Rais was arrested on September 15th 1440.
He was at Machecoul. He could have resisted almost indefinitely behind its fortifications, but he gave himself up for arrest. This was not the action of a guilty man. In all probability he thought that his arrest was a mere formality in connection with the affray at St-Etienne-de-Mer-Morte - he had had a meeting with Jean V in July to discuss the fine he had been given for this matter. Clearly the meeting had given him no reason for serious misgivings.
Initially, Gilles accepted his judges, but at this point he did not know the true nature of the charges against him. It was not until October 8th - a full three weeks after his arrest - that it was revealed to him that he stood accused of murder and sodomy. And it was at this point that he railed against his judges, calling them simoniacs and ribalds. This has always been taken to be another example of the madness of Gilles de Rais; in context, it would appear to be the shocked and frustrated outburst of a man who realises that he has fallen into a trap. He was now in the clutches of the Inquisition. He had no counsel for the defence. He was denied the right of appeal because he had necessarily, because unforewarned, attempted to appeal orally instead of in writing. He denied these charges until the point when he was shown the forced confessions of his servants and threatened with torture himself.
Jean V had already confiscated and disposed of Gilles's property on September 3rd, twelve days before he was arrested.
The cynicism is breathtaking.
Long before he was arrested, Gilles de Rais was a dead man walking.

Posted by morbid morag at 16:06 No comments: 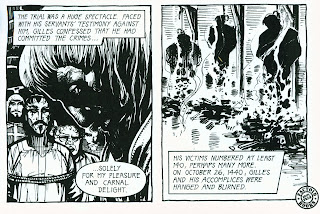 There are literally hundreds of web pages about Gilles de Rais and more are being made every day. Many of them are lurid and inaccurate, cutting and pasting phrases from other sources which may or may not be reliable. How can you tell the good ones from the bad?
There are certain errors which are frequently made by cut-and-paste web sites. For some reason, the date of Gilles's death is commonly given as October 25th - actually the day he was sentenced. Presumably one person initially made this slip and others copied it without researching the facts.
It is claimed that he had a blue beard, which is a myth - there is no contemporary portrait of him and descriptions are vague and general. An unusually-coloured beard would certainly have been remarked upon!
Often his date of birth is given - usually as November 15th, which was when his brother was born. Weirdly, although the month can vary, the date is always given as the 15th. In fact, the date of Gilles de Rais's birth is not known.
But by far the commonest error is that he was hanged and burned, or often just burned. He was not. His body was removed from the flames and laid to rest with full honours in the church of Notre Dame des Carmes in Nantes, among the heroes of Brittany.
This post is illustrated with the final frames of an Eddie Newell cartoon, written by Steve Vance. In this case the error was not accidental, as the bibliography for the cartoon cites biographies by  Jean Benedetti  and Leonard Wolf. Giving Vance the benefit of the doubt, it seems probable that this change was made for dramatic effect. As a rule, however, it is an attempt to gloss over the final privileges granted to Gilles - the grand procession to the gallows with the people praying for his soul, the entombment in sanctified ground - because these sit uneasily with his reputation as evil child-killer. It was a cynical gesture on the part of his judges to allow his body to be removed from the flames because as a convicted practitioner of black magic he should have been burned to ashes in order to destroy the physical integrity of his body. He should certainly not have been allowed to rest in a tomb inside a church. But then, neither his judges nor the people who wept and prayed for his salvation ever believed him to be a heretic, a sorcerer or a murderer.
Posted by morbid morag at 16:03 No comments:

Why did Gilles not proclaim his innocence in the moments before dying?

This press cutting is extracted from the Milwaukee Sentinal, 12th April 1936. It deals with an attempt to rehabilitate Gilles de Rais in the mid 1920s, on rather strange grounds. What concerns us here is the final paragraph, which dismisses the claims of Gilles's innocence because he failed to speak the truth at the foot of the gallows.
So did Gilles have nothing more to fear from telling the truth? Not at all. He had made a deal with his judges and if he had gone back on his word and retracted his confession, the consequences for him would have been appalling. He would have been excommunicated on the spot, which to his mind would have consigned him to Hell. Instead of dying the swift death of a cooperative prisoner, his neck broken instantly, he would have been allowed to strangle slowly over the flames which would consume him. Then his ashes would have been thrown into the Loire instead of resting in the cathedral of Notre Dame des Carmes alongside other Breton heroes. From his point of view, as a mediaeval Christian, if he remained silent he would die relatively painlessly and be received into Heaven; if he spoke out he would suffer a prolonged and agonising death that would plunge him into Hell. A last-minute profession of innocence was not an option that a sane man would take.
Posted by morbid morag at 16:20 1 comment: